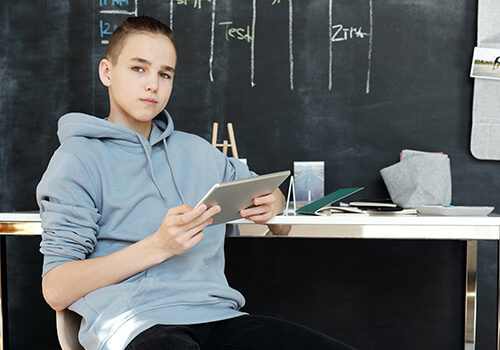 I have heard “My child is very smart, but he can’t seem to get it together” numerous times. This assertion is usually followed by statements like, “In school, he does well on tests but he forgets to turn his assignments … He is so disorganized … He procrastinates … He has trouble getting started on tasks … It takes him forever to complete his schoolwork.” With much investigating, I often determine that this child is, in fact, bright and highly motivated to do well, but he or she struggles with executive functioning.

Executive functions are skills necessary for children and adolescents to become successful adults (e.g., maintaining focus and sustaining attention, even when material is boring, creatively connecting ideas and facts while working through a problem, and “thinking outside the box”). Research shows that children with better executive functioning (e.g., children who are more persistent, less impulsive, and have better attention regulation) have better health, higher incomes, better jobs and a have a better quality of life when they became adults compared to those who had poor executive functioning as young children. Thus, it appears that if these skills are not formed in childhood, difficulties can lead to problems in adolescence and adulthood.

The executive functioning system is sometimes referred to as the CEO of the brain. This system takes in information, determines what is important, decides what to do with the information (e.g., what strategy to use when solving a problem), and sends it to other areas of the brain for further processing and task execution. Thus, executive functions are critical for understanding how ideas are related to each other, connecting what was read or heard when learning something new, performing mental math calculations, understanding multi-step instructions and following directions in the correct order. Strong executive functioning is not only important for success in school; it also plays a role in interpersonal relationships.

Some children and adolescents who struggle with executive functioning have a learning or developmental disorder, such as Attention-Deficit/Hyperactivity Disorder or Dyslexia. For others, particularly very bright students, the issue is subtler and represents a relative weakness for them. For example, remembering information (e.g., for tests) might be easy for them and they may be active participants in the classroom, but task execution is harder. For this reason, many children and adolescents who struggle with executive functioning go unnoticed because they are very good at compensating for difficulties with their strengths in other areas. This strategy works for a while, but for many, as academic demands increase, it becomes more difficult to manage issues, and difficulties with executive functioning begin to impact daily functioning, particularly school performance.

The brain cells involved in executive functioning are primarily located in the prefrontal cortex, where research shows decreased activation in individuals with executive functioning difficulties, perhaps due to a delay in the maturation of the frontal lobe. The good news is that the prefrontal cortex is one of the last areas of the brain to develop. Therefore, executive functioning processes get better as a child gets older. Having said that, some children and adolescents will struggle more in this area than others their age. In those situations, it is important to seek help from a specialist to identify the root of the problem (e.g., with a neuropsychological assessment), address the issue, determine an appropriate treatment and academic plan, and evaluate the effectiveness of the intervention (e.g., with a brief re-evaluation and/or parent and teacher reports). Interventions designed to improve executive functioning can have a broad impact by providing a child struggling with the support needed to help them effectively apply their intellectual functioning and creativity to tasks, and in doing so, demonstrate their full potential and improve self-concept and self-efficacy.

Dr. Karen Wilson is a Clinical Neuropsychologist, Director of West LA Neuropsychology, and an Assistant Clinical Professor (Voluntary) in the Medical Psychology Assessment Center at the Semel Institute for Neuroscience and Behavior at UCLA.  She is also the Founder of ChildNEXUS.com, a web platform that provides information to parents who have children struggling with neurodevelopmental or social-emotional issues, and connects parents with professionals who provide services to children and adolescents.

Dr. Karen Wilson has shared her expertise in a broad range of media outlets: television,  radio, podcasts, print, and online. She is a sought after speaker and has been invited to address a multitude of audiences including parenting groups, educators, and professionals attending national conferences.