Rise of Teen Vaping and the Associated Risks 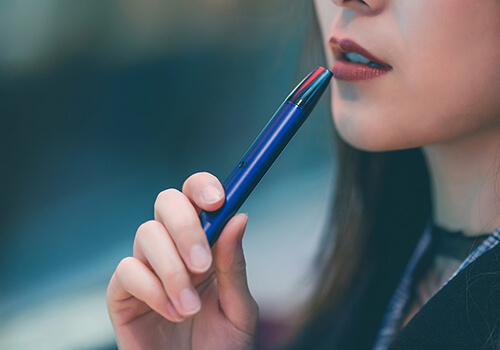 Recently, the Centers for Disease Control released a report that showed there are 805 lung injury cases and 12 deaths related to vaping or e-cigarettes. While the majority of these cases were aged between 18 and 34 years old, 16 percent were under age 18.

The U.S. Department of Health reported in February that teen vaping is on the rise and suspect this is due in part to how teens are attracted to flavorings provided in e-cigarettes. Alarmingly, their report indicates e-cigarettes are driving an increase in nicotine use for students. Further, teens underestimate the dangers of e-cigarettes, falsely believing they are not dangerous but the reality is, nicotine is particularly dangerous for teens whose brains have not fully developed.

Why Teen Vaping Is Increasing

Yale medicine reports that "more than 3.6 million middle and high school students currently use e-cigarettes" but, why? What makes vaping so appealing to students?

Vaping companies are appealing to the teen market by implementing flavored e-cigarettes. These can range from plain nicotine and menthol flavors to fruits and candies and even breakfast and beverage flavors. When teens are inhaling nicotine or THC products that taste like strawberry cheesecake, they are less likely to be aware of the nicotine in the product. In fact, 66 percent of teens who vape say they believe it is just flavoring in their e-cig and almost 14 percent simply "don't know" what is in it.

In the U.S. it is illegal to sell tobacco products to anyone under the age of 18 - including e-cigarettes - and in some places, the age is 21. However, this is not stopping teens from getting them. A survey conducted by Truth Initiative showed that 74 percent of today's vaping teens are obtaining vapes at physical retail locations.

In the 1970s, the US Congress banned cigarette advertising after the surgeon general released a warning linking cigarette smoking to lung illnesses. Experts have asserted that marketing efforts of today's vape products "target" adolescents. Some brands of e-cigs can be used on television, according to NPR.

Dangers and Risks of Vaping

The risks and dangers associated with vaping are vast and many teens may not be aware of them. It is critical for parents to be aware of these risks and inform their children of them as well to start decreasing the incidences of teen vaping.

Nicotine is a highly addictive substance. Since kids often don't realize the amount of nicotine they are inhaling through e-cigarettes, they don't realize they are creating a physiological dependency on nicotine, which is harmful to their developing brains. Further, studies have shown that "young people whose first tobacco product was an e-cig were more likely to start using traditional tobacco products during the next two years."

In the CDC report on lung injury cases associated with vaping, they admit to not knowing which chemical in the e-cigs is causing these lung injuries. The New York Times reported yesterday that 17 cases of lung injury appeared to be the result of exposure to toxic chemicals similar to "those seen in people exposed to poisons like mustard gas, a chemical weapon used in World War I."

Today's e-cigs provide users with nicotine but there are also e-cigs that provide marijuana. Teens might think they are vaping a nicotine e-cig only to inhale THC - the psychoactive component in marijuana. Additionally, the U.S. surgeon general warns that e-cig use among teens can be linked to alcohol abuse and drug abuse.

It is extremely important that parents and their teens understand the risks and dangers of vaping to avoid health issues and even death as the government and vape manufacturers learn more about these products.

Futures Academy offers various health and well-being seminars at our campus locations. For more information, visit www.futuresevent.com for schedule and topics or contact us today.