Give your child wings to fly: How parents can help develop strong, independent children 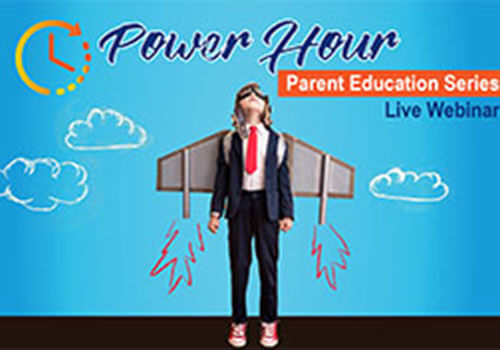 The goal of every parent raising children is to do just that: raise them. We all believe that with our help and guidance our children will not only achieve great things, but will become strong, successful, independent adults. And while our children rely on us heavily in their early years, as they enter adolescence, they become less reliant and strive for more independence. For many of us, this time of separation can be challenging especially since we believe we know our kids (and their flaws) better than anyone else, and we worry that without our continued help they might struggle, or worse yet, fail.

We’ve all heard the expression “helicopter parent,” and we’ve all sworn that we’d never become one. I mean, when my daughter called me from school telling me she forgot her PE shoes, I would take them to her during my lunch break. But only because she needed them and it wasn’t a big of a deal since the school was just a few miles from my office. And when my son told me at ten o’clock at night he needed to print his English essay that was due in the morning only to discover we were out of printer ink, I searched for stores that were open and drove over in my pajamas to grab a new cartridge. But only because I didn’t want him to get a bad grade. I used to feel really good about how helpful I was to my children as I added another hash mark to my mom-of-the-year virtual scoreboard before going to bed. But what I came to realize was I wasn’t helping them; my good intentions were actually hurting them.

One of my favorite books on my parenting shelf is  “How to Raise an Adult: Break Free of the Overparenting Trap and Prepare Your Kid for Success” by Julie Lythcott-Haims, who also happens to be a former Stanford dean of freshmen from 2002-2012. Her hands-off approach to parenting encourages tough love in lieu of the over-parenting tendencies that tend to kick in when our children are facing a challenge. Lythcott-Haims outlines the three widely accepted styles of parenting--Permissive, Authoritarian, and Authoritative--and how one style in particular has been proven to be most effective. According to Lythcott-Haims, the first two parent styles, Permissive and Authoritarian, are not healthy, as they both venture too far on either end of the spectrum. Permissive parents are more concerned about the relationship they have with their children, often times striving to be their friend rather than a parental figure, and, as a result, fail to establish healthy boundaries. On the opposite end, Authoritarian parents are so strict and dictatorial in their methods, children are often fearful of disappointing or upsetting them, and, as a result, have a hard time being honest about what they really want. The perfect balance and the style we should be modeling our behavior after is Authoritative parenting. This style of parenting is ideal because “authoritative parents show love and affection but still enforce rules and set high expectations for their kids.”

In a Ted Talk “How to Raise Successful Kids- Without Over-Parenting,” Lythcott-Haims shares how kids today live a “check-listed childhood” that far exceeds the expectations of perfection in which we were asked to perform during our youth. With such a hefty checklist and such lofty expectations, it’s no wonder “parents have to argue with every teacher and principal, and coach and referee, and act like our kids’ concierge and personal handler and secretary.” We are so wrapped up in this delusional checklist and so fearful that one false move could close doors to future opportunities that we can’t help but step in to save them. But what most parents fail to recognize is that while we’re “saving” them, we are also subversively telling them they can’t do it on their own and we are depriving them from developing an essential life skill: self-efficacy. Self-efficacy requires one to recognize that through one’s own hard work and determination, one can achieve their own success. Self-efficacy cannot be nurtured and developed if a parent’s actions are the ones driving a student’s success: “If our children are to develop self-efficacy, and they must, then they have to do a whole lot more of the thinking, planning, deciding, doing, hoping, coping, trial and error, dreaming and experiencing of life for themselves.”

I was recently chatting with a group of parents and one of them was joking about how she should get an award too for all the things she contributed to her son’s success in completing middle school and graduating in a couple of weeks. Everyone was laughing and there was a genuine sense of pride in how much effort they had each put into their children’s middle school accomplishments: the homework, the volunteer hours, the projects, the book reports, and the list went on. I couldn’t help but wonder, What would have happened if these parents didn’t step in to help? I have no doubt each one of their children would still be receiving a diploma at the end of the year, but I do wonder how much more proud those kids would be of themselves if they were given the space to figure out some of their challenges on their own. And more importantly, how much more prepared they would be to tackle the challenges they would inevitably be facing in high school with the self-efficacy they developed in middle school.

Last summer, I sent my son to Yosemite National Park for a one-week summer camp. That’s right, my son who can’t remember to take his lunchbox out of the car when I drop him off at school in the morning, hiked around Yosemite with two guides and a group of seven other thirteen year olds for one week. He carried all of his supplies on his back, took turns cooking and cleaning during mealtime, and came down that mountain feeling more successful than I had ever seen him. As I reflected on his new found independence, there were two key factors at play: 1) The miles he covered and the success of his accomplishment was all his own (no one else climbed the tough terrain for him, no one else carried his bag, no one else organized his supplies), and 2) He was a contributing member of his outdoor hiking group through the jobs, or chores, he was assigned (lighting the fire, washing the dishes, packing up the trash to bring it back down the mountain for proper disposal). Believe it or not, “according to the Harvard Grant Study, a 75-year research project, the single biggest predictor of happiness and health in adult life was having done chores as a kid. Chores instill in kids the attitude that life is about teamwork and cooperation, and that a clean, tidy living space doesn't just happen by magic.” If you happen to be one of those parents that took chores away from your child thinking it would give them more time to focus on the more important things on the checklist, perhaps you’d like to reconsider.

Regarding some of these strategies, I’ll be the first to admit, easier read than done. I vividly recall the first time I didn’t bail my kids out; the look of hurt and horror in their eyes was like a dagger to the heart. It went against my protective grain, or at least, my definition of protective at the time. I had to redefine what protective meant and I had to not only teach myself what protecting them looked like, I needed to teach them.

Self-efficacy helps children create a sense of self, and it is through this sense of self that children learn to be independent. In order to raise independent children, our job as parents is to provide our children with the opportunity and means to pursue their goals, all the while providing love, guidance, and encouragement for their efforts. “If your children are independent, you have provided them with the belief that they are competent and capable of taking care of themselves. You offered them the guidance to find activities that are meaningful and satisfying. You gave your children the freedom to experience life fully and learn its many important lessons.”

As hard as it may be to hear, our children are sometimes better off without us. As an educator, when I see a kid getting out of their comfort zone and doing something wonderful on their own, for a fleeting moment I think to myself, Wow, I wish their mom/dad could see them now, but I’m also keenly aware that if the parent were present, the sequence of events might be completely different. If parents were allowed on that backpacking trip in Yosemite, how many of them would be “helping” their child if their pack was too heavy or if they weren’t washing the dishes right, and how many of those kids would have asked for help as soon as things got challenging? What’s hard to recognize is that even when your child is asking for help, often times it’s better for them to try and overcome the challenge on their own. We need to step aside and give them some space in order to help them become productive and independent young adults.

In order to put our best Authoritative parenting foot forward, we need to check the job description we are operating under. As parents, we need to accept there are several things we can’t do for our children-- We can’t make our children’s friends for them, we can’t give our children high self esteem, we can’t keep our children completely safe, and we can’t make our children independent. We can, however, encourage them to take risks and try new things. We can demonstrate that we believe in their innate abilities and their potential to grow and improve. If our primary job is to raise our children to be independent adults, then we need to encourage self-efficacy. We need to provide them with the opportunities to demonstrate their own capabilities and we need to have confidence in their abilities. As parents, it is through love and support, rules and consequences, and reasonable expectations that our children will learn to spread their wings and fly.

How to Raise An Adult: Break Free of the Overparenting Trap and Prepare Your Kid for Success